Facebook and Google Own 80% of the Top 10 Smartphone Apps

By Newsroom on September 16, 2016Comments Off on Facebook and Google Own 80% of the Top 10 Smartphone Apps

Smartphone apps account for 3 out of every 4 minutes we spend on a mobile, a recent study by comScore has found. So much for giving mom a call. The average monthly hours spent on smartphone apps has grown for all age groups in the U.S. Even the age 55-65 segment saw a 37% year-over-year increase in June 2016. For the top 1000 digital media properties, desktop audience has dropped 4% since June 2014, while mobile audience has grown 81%.

The future belongs to the mobile app. So who’s winning ?

A quick look at your homescreen would have been able to tell you that. Of the top 10 apps ranked by unique monthly visitors in June 2016, 80% are either owned by Facebook or Google. The other two are Pandora Radio (P) and Amazon Mobile (AMZN).

Facebook takes the first and second spot with Facebook and Facebook Messenger, respectively. The average American of age 18+ spends 13 hours a month on Facebook’s flagship mobile app. The app accounts for three quarters of all time spent on apps in the social networking category. This is a big deal considering 20% of total mobile app time of the average American is spent on social networking. 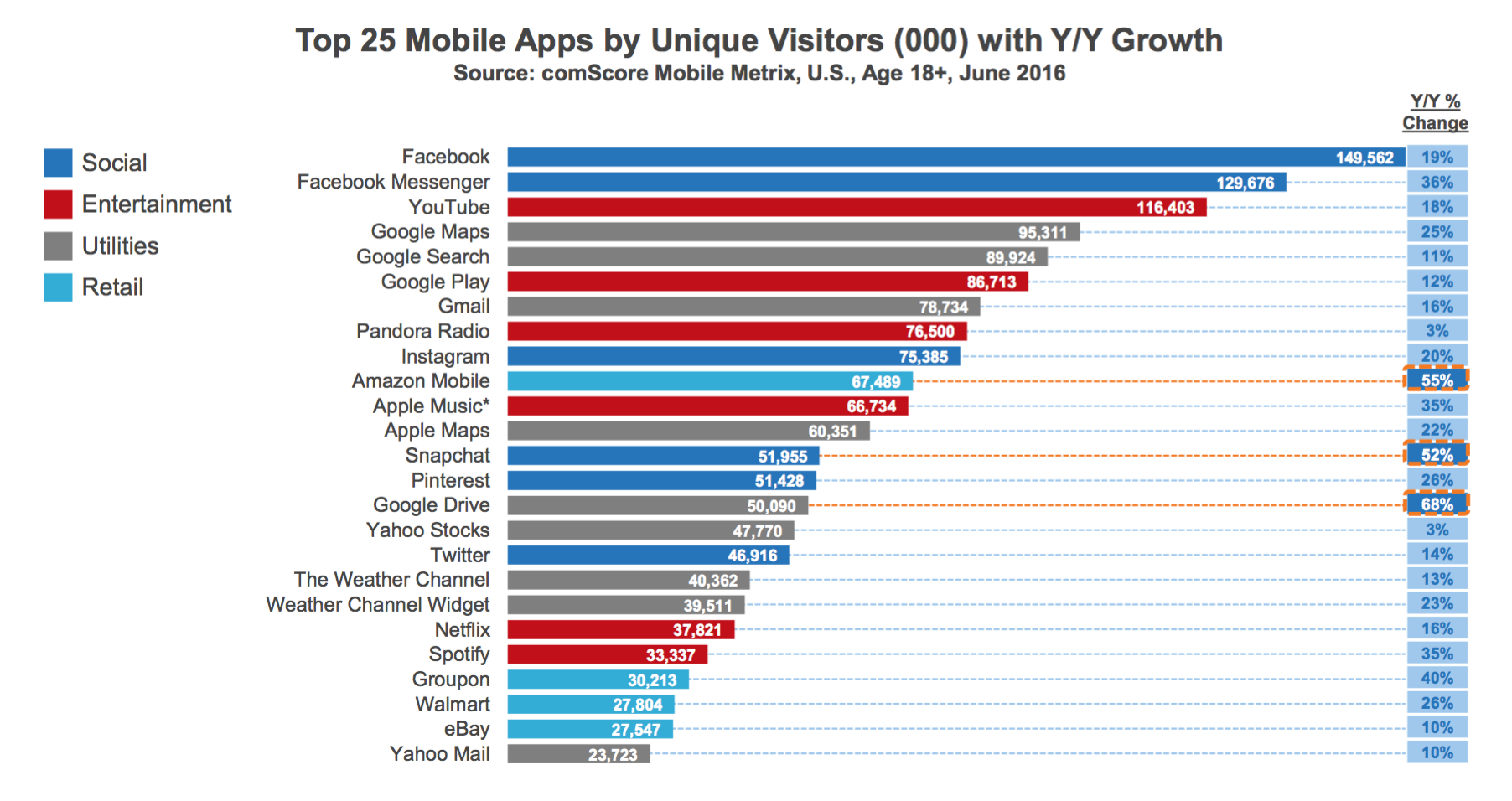 The Kids Are Alright and Snapchatting

Americans between ages 18 and 24 spend 93.5 hours a month on smartphone apps, the most of any age group. ComScore has also found that the younger you are, the more time you spend on a smartphone app instead of a desktop.

When it comes to penetration in the millenial market, Facebook and Google have growing competition from the likes of Snapchat, which boasts a 70% penetration.This explains Facebook’s efforts to appeal to a younger audience with apps like Lifestage and Snapchat-like features on Instagram.

Snapchat is also a growing threat in other age segments. Its penetration in the Age 25-34 category reached 41% in June 2016, according to comScore. A story on technology website Wired in June said Snapchat is on the verge of its “mom moment” or that it is slowly growing more mainstream. The company has vastly expanded its advertising platform this year and plans to capture foreign advertising business in the near future as well. (See also, Snapchat Ad Revenue to Reach $1 Billion in 2017)

Niantic’s Pokemon Go app also got a mention in the report as the latest mobile app phenomenon. The app peaked on July 13 with 28.5 million unique daily users.

Have We Reached Peak App ?

Nearly half of all smartphone users don’t download any apps in a month and about 13% download one. The report says, “While we haven’t yet reached ‘Peak App’ the market is definitely tightening, and app publishers need to rethink how to break through to the consumer’s screen.”

Facebook and Google Own 80% of the Top 10 Smartphone Apps added by Newsroom on September 16, 2016
View all posts by Newsroom →