By Newsroom on March 9, 2018Comments Off on British Airways expands its biometric boarding gate trials in the US 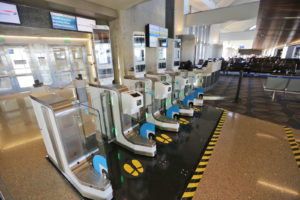 is expanding its biometric boarding gate tests in the US. Last November, it began testing self-service boarding gates in Los Angeles Airport that don’t require customers to produce either their boarding pass or their passport.

Instead, passengers only need to look into a camera, wait for their biometric data to be checked against their passport, visa or immigration photos and then walk onto the plane once their identity has been verified.

Passengers still have to produce their boarding pass and passport when going through check-in and security, but the biometric boarding gates eliminate the need to use the documents when boarding. British Airways says that in Los Angeles, the gates have allowed 400 passengers to board in 22 minutes, which is less than half of the time it typically takes. The company says that the technology, produced by SITA, uses facial identification systems similar to those on smartphones. 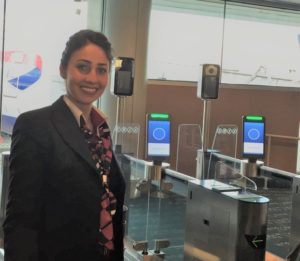 Airways is far from the only company developing biometric systems for airports. JetBlue is running a similar trial that allows passengers to self-board without travel documents on flights from Boston to Aruba. In 2017, Delta began trying out facial recognition systems for checking luggage and using fingerprints instead of boarding passes.

Dubai International Airport is working on a tunnel equipped with facial recognition cameras and iris scanners that would eliminate the need for travel documents and both Australia and the US are interested in wider applications of biometric systems in airports.

“Our latest trial with SITA in Orlando is helping us to reduce the time it takes to board our aircraft, and early indications are that using biometrics for arrivals has huge potential too,” Carolina Martinoli, British Airways’ director of brand and customer experience, said in a statement. “These trials will help us to evolve the technology and processes we use to best suit the needs of our customers.”

British Airways expands its biometric boarding gate trials in the US added by Newsroom on March 9, 2018
View all posts by Newsroom →