By Newsroom on February 9, 2018Comments Off on Bloomberg created a video game to document the demise of the American shopping mall

Bloomberg.com has found a compelling new way to report on a tired old subject.

The American Mall: A 2018 Retail Challenge is an interactive, retro video game that doubles as an agonizing journey through mall management.

First, choose a character like tech-savvy angel investor Maximilian or local business magnate Linda. From there, choose a strategy for turning around the mall. Then, navigate your way around to stores that sound oddly familiar, and hope that the tenants pay their rent. Careful of which marketing gimmick you choose—you could be left with thousands of pens collecting dust, but that giant artery that reminds shoppers of heart health? The one that kids can crawl through? It’s a viral hit.

“We thought, let’s just really push it hard and come up with zany and funny ideas,” said Bloomberg’s deputy editor of special projects Thomas Houston about the scenarios. Houston said after extensive internal testing, the team found “the tone was a little bit off, so a lot of the situations were pared back.” 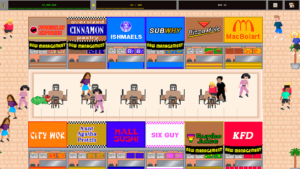 Pared back, but often based on actual situations. That crawl-through artery used in the game was actually in a real mall. “Things were very much influenced by news stories we’ve seen before,” Houston said.

A team of Bloomberg reporters, editors, developers and the copy desk spent about three months building the game as part of a larger series on retail, including this data visualization called “The Death of Clothing.”

Houston said they thought about using real brands but decided instead to use names “evocative” of well-known retailers like Victoria’s Conspiracy, Pineapple Republic and Del Burrito. 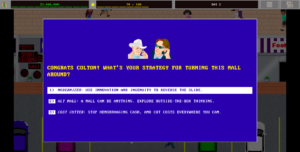 Average gamers are playing about 4 minutes per session, though it’s topped one hour for some. And, for now, this is the only game in town for Bloomberg.com, but it is its most ambitious storytelling to date. (The site built The Trading Game, about picking stocks, two years ago.) The highest scorers are those who keep the mall open the longest, as of this writing more than 2,000 days.

And what does the winner of The American Mall get?

“I think the satisfaction of being at the top of the ranking should suffice,” Houston said.

Bloomberg created a video game to document the demise of the American shopping mall added by Newsroom on February 9, 2018
View all posts by Newsroom →