The BBC became the latest publisher to introduce vertical video to its news apps, both domestic and international. Already, the overseas version carries vertical advertising. For now, that consists of static ad interstitials between videos, but in the next few weeks vertical video ads will be introduced — but the format is not without its own challenges.

The broadcaster has an ocean of video assets at its fingertips, so for now the app will feature videos reformatted to vertical. In time, however, more videos will be shot originally in vertical format.

More than 60 per cent of BBC News’ digital traffic now comes via mobile devices. A team of 20 people from the London newsroom will be involved with creating, sourcing and formatting video for the domestic and international apps. They will curate material that suits the mentality of viewers at the BBC’s peak viewing times of day: 7:00 a.m. and 10:00 p.m., regardless of time zone. That means videos available in the morning will give an overview of what big news stories are coming up, while those published in the app at the end of the day will be more like round-ups of the biggest daily news.

Users can view the videos within the “videos of the day” section of the app, and all will have subtitles, given people tend to watch mobile videos without the sound on. The goal is for the videos to feel like a finite package, rather than an endless scrolling feed. 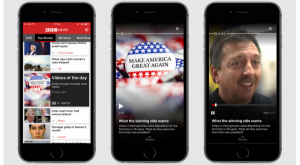 Agencies certainly welcome it. Some believe that vertical ads could be just what mobile advertising has been missing. James Connelly, co-founder and CEO of Dentsu Aegis Network’s mobile agency Fetch, said vertical ad uptake remains small among advertisers but is gathering pace, especially among those incentivized by campaign performance (rather than brand advertisers) like the big gaming companies. Hotels.com and Expedia are among those who regularly run vertical advertising, according to Connelly.

He added that vertical videos could help raise publishers mobile yields in some cases. “Because it works, it will be in more demand from advertisers which means they will pay more for it. Although that’s possibly something that the performance brands would be more willing to do than the brand advertisers, who already pay premiums,” he added.

Vertical ads have been on the rise due to the popularity of Snapchat. But publishers are just now starting to want in on the action. In the US The Washington Post and Hearst have all run vertical ads on their mobile apps, while in the UK, The Sun and Mail Online are also prolific vertical video publishers.

News Corps’ video ad tech firm Unruly, which supplies video ads to the newspapers in the group — The Sun and The Times — claims that its global mobile vertical video campaigns have driven interaction rates 6x that of horizontal video.

“Vertical is a proper break through in mobile advertising. They won’t be another flash in the pan innovative creative format,” said Connelly. And yet, they’re a way off being mainstream, and there are still a number of publishers in the U.K. at least, who aren’t aggressively pursuing it. The Times plans to start exploring vertical video next year, and other nationals like Trinity Mirror are yet to be convinced it’s worth pursuing.

“For starters a lot of our video consumption is news and entertainment content where vertical video may not be possible,” said Trinity Mirror strategy director Piers North. “The ad architecture and ecosystem outside of the social space is relatively immature in this space and traditional forms of video still deliver ROI for brands and publishers.” 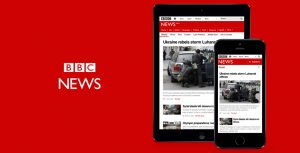 Mobile advertising has long been criticized for being nothing more than a repository for repurposed TV assets. But it’s less easy to get away with such lazy approaches with vertical video, according to Connelly. And yet, barriers to mainstream adoption remain. “Brand advertisers are looking at vertical video more, but they need to shoot their ad in a really different way. And yet they’re often working with archaic agencies who still work along the lines of big cinema-style TV videos, and aren’t thinking of the medium,” he said.

Liam Pook, partnerships and emerging media director at Essence. “Vertical video isn’t commonplace among clients currently because there needs to be a shift in how creative agencies are developing assets,” he said. “Unfortunately, a large number of agencies still have a ‘TV first’ mindset, which means assets delivered in landscape, which isn’t fit for mobile.”