By Newsroom on February 5, 2018Comments Off on Apple Music set to overtake Spotify in US subscribers, according to The Wall Street Journal 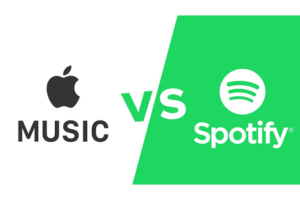 and more people are rocking out to Apple Music instead of Spotify. And as a new report from The Wall Street Journal indicates, if Apple Music continues to grow at its current rate, it will officially overtake Spotify this summer as the streaming world’s number one service.

The news likely doesn’t thrill Spotify, which is prepping its big initial public offering for a spring launch—an unconventional offering, too, as the company is planning to just list its shares on the New York Stock Exchange and let the market figure out the rest, rather than hiring an investment bank to issue new shares and sell them on the company’s behalf.

According to people familiar with streaming figures for both Apple Music and Spotify, the former has a monthly growth rate of around five percent. Spotify, on the other hand, has a growth rate of just around two percent. If that keeps up, Apple Music will officially bump Spotify off the top in summer—and there’s no reason to believe it can’t, given that part of Apple’s success in building an audience for Apple Music lies in the fact that the service comes bundled with most of the major devices the company sells.

Part of the difficulty in figuring out which streaming service has the most subscribers is that the streaming services all have interesting ways to define their total audience size. Both, for example, count each individual user in a family plan to give their stats a bit of a bump instead of just counting the family plan as a single “subscriber.” As the Journal notes, some subscribers might gain access to either service as part of a bundle deal with their mobile carriers or as part of a package deal that offers access to other streaming services, like Hulu.

Apple, in fact, would already have a larger audience for Apple Music than Spotify right now if the company counted the users participating in its trial periods. All Apple Music subscribers initially go through a free trial before becoming full, paying members, whereas Spotify offers a free streaming tier that users can stay on for as long as they like. Typically, Spotify likes to tease both subscriber counts and user counts whenever each number reaches a significant milestone.

Apple Music set to overtake Spotify in US subscribers, according to The Wall Street Journal added by Newsroom on February 5, 2018
View all posts by Newsroom →