By Newsroom on April 18, 2017Comments Off on Aktuellmix helped Samsung gain the edge during Rio 2016 with Samsung Arena

To launch the Samsung S7 during the Rio Olympic Games, Samsung brought the Olympic spirit to its stores and developed a special stand to display its products. In addition, it was a chance for the public to receive posters of images that had been photographed using the smartphone as gifts.

This action was created by Aktuellmix, and was a great success. During the Olympic Games, more than 1 million people were impacted in 20 stores in Rio and São Paulo. In addition, the public commented on and shared the initiative on social media. 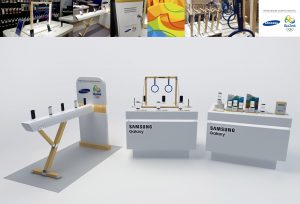 Aktuellmix helped Samsung gain the edge during Rio 2016 with Samsung Arena added by Newsroom on April 18, 2017
View all posts by Newsroom →