By Newsroom on November 21, 2016Comments Off on Adidas’ m-commerce app takes inspiration from Uber to go beyond influencers 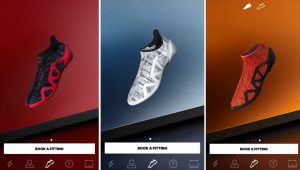 Rather than use its mobile app to sell football boots to as many people as possible, Adidas is only letting those with a special code make purchases, much like the early Uber model where growth comes from consumer referrals.

Going beyond the idea of “influencers” being a single and distinct group of people sits at the heart of what the brand believes could shape the way it launches football boots in the future. Everyone who buys Glitch boots is an influencer in the sense that they can only do so with a referral code for a locked app and so consequently get to decide how the community grows.

From pushing the order button, people living in London within the M25 can set their delivery time within a four-hour window and then track its progress. It’s an extension of the “on-demand” model that allows footballers to customise their own Glitch boots within seconds to match their playing style. They can do this by interchanging either an inner shoe or an outer, customisable skin – which slip into one another – and Adidas claims is as easy as changing the fascia of a Nokia 3310.

“The ability for players to change their style whenever they want is something not seen before so we had to reflect that in the way we launched the product,” said Marc Makowski, director of business development for Adidas Football. Like the boot, the ‘locked app’ mechanic could change over time based on consumer feedback, Makowski revealed is inspired by startup mentalities that launch small and scale quickly.

But there’s no point in the app creating lots of buzz for a few months, if it can’t turn into a successful and scalable model.

In an ironic twist, less could mean more for Adidas in this regard as it’s relying on fans to share the app and therefore generate sales rather than heavyweight marketing. Similar to Uber’s early model, the sports brand is rewarding those people who do bring in new customers, with some even being connected to its professional influencers, players and its other brand channels. On the flipside, fans are running the app to a degree, tasked with running a chat service alongside starring in the supporting films and social content. 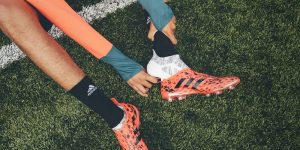 These are guys who were young players in London, who’ve helped name a new Adidas boot, tested early prototypes in their games, featured in the app’s launch films and are now helping the brand reach other players. Ceding so much responsibility to a community backs Makowski’s claim that the sports brand wants to build the app (and the Glitch) brand with its fans, spreading the marketing investment across a range of micro-influencers rather than investing it all in one big-gun celebrity.

“The whole world of Glitch is built based on consumer insights and developed together with our audience in London… The most exciting thing about the app itself is that we’ll be able to constantly review consumer feedback as we go to develop it in line with what our audience want,” said Makowski.

Thinking like this makes Glitch’s proposition much more of a CRM strategy than a mobile or social media one. And it’s one that could have wide-ranging consequences for the rest of Adidas’ marketing; the brand has made no secret of its plans to build hyper local communities in cities across the world, having tested it out during the Euros earlier in the summer.

“Mobile has become such an important medium for our audience when engaging with others and consuming content and information,” said Makowski. “Glitch is a totally new approach of how to bring a football boot to market. The decision to not make open from the start was based on a couple of factors, one of which was to understand potential demand first. Based the behaviour we see from the launch we’ll adapt timelines for when the app will be opened up.”

Such has been the clamour to get into the app and consequently buy the boots, that some opportunistic fans are auctioning the referral codes on eBay. While likely to be frowned upon by the sports brand, that fans are even doing this speaks volumes about the intangible opportunities and challenges around its new found micro-influencers. 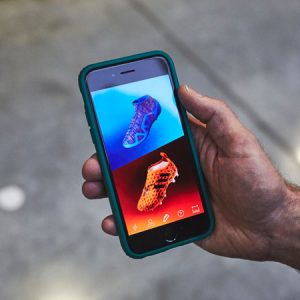 The challenges are to scale influence without scaling costs at the same rate – and that sharing usually runs into the sand.

To avoid the costs of manually scaling peer to peer recommendations, most of the successful technologies for encouraging them have either included explicit referral fees, like Uber, or gamification like Dynamic Signal’s platform that encourages sharing your views with your networks. These mechanics don’t really work for one-off purchases like Adidas,” argued Rob Blackie, director of social at Ogilvy One.

“Even more challenging, because most of these referrals will happen by peer to peer email and instant messaging, they are relatively hard to track – making it harder for brands to track which parts of their marketing are working best. While referral codes can track who shared it, they don’t reveal why or how they shared it. Adidas have to instead hope that, on average, each buyer passes on the referral code to enough people that its reach expands over time. The danger with an exclusive product is that buyers hoard the code – and that it doesn’t get much beyond the first people who get access.”

Iris is the lead creative agency for the app, while Possible created it. The retail platform that powers the service has been developed by NewStore.

Adidas’ m-commerce app takes inspiration from Uber to go beyond influencers added by Newsroom on November 21, 2016
View all posts by Newsroom →