Uber Teams Up with Star Wars for Rogue One Promotion

By Newsroom on December 12, 2016Comments Off on Uber Teams Up with Star Wars for Rogue One Promotion 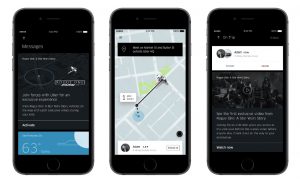 Uber is the latest tech firm to partner with Disney in promoting the new film Rogue One: A Star Wars Story, replacing car images within the app with various Star Wars spaceships including the iconic X-Wing fighter.

The promotion will run in hundreds of cities worldwide between 12 and 18 December on an opt-in basis, with users also able to unlock exclusive curated video content in addition to the changes to the app’s appearance.

“This collaboration delivers – at your fingertips – a first-of-its-kind warm-up to the journey and vehicles you’ll see in Rogue One,” said Asad Ayaz, executive vice president of marketing at Walt Disney Studios.

The partnership isn’t the first time Uber has tied into a major film release. The ride-hailing app has previously featured marketing for Batman v Superman: Dawn of Justice, X-Men: Apocalypse and Kingsman, although this is the first promotion that has integrated directly into the app’s functionality.

Uber Teams Up with Star Wars for Rogue One Promotion added by Newsroom on December 12, 2016
View all posts by Newsroom →