By Newsroom on May 16, 2018Comments Off on Uber preps test of 30-minute food delivery by drone 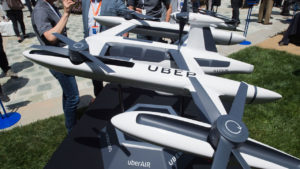 plans to deliver food by drone in San Diego as part of a wide-reaching commercial test program approved by the U.S. federal government, said Dara Khosrowshahi, the chief executive officer.

Khosrowshahi said people should expect meal delivery in five to 30 minutes, depending on whether it comes from a drone or a human. “Push a button and get food on your doorstep,” he said.

Uber is now the largest food delivery business in the world, Khosrowshahi told the crowd during an onstage interview with Bloomberg at an Uber conference in Los Angeles.

The U.S. Transportation Department said it chose 10 state, local and tribal governments and a handful of companies, including Alphabet Inc., FedEx Corp., Intel Corp., Qualcomm Inc. and Uber, to work together on commercial drone testing.

Hamburgers via drone was among a range of topics that Khosrowshahi touched on during the interview at the company’s flying car conference, Uber Elevate. While the CEO said he’d joined Uber last year as a skeptic of the flying car program, he eventually decided to support the futuristic endeavour. “Uber can’t just be about cars,” he said. “It has to be about mobility.”

Uber itself isn’t building flying cars. Instead, it’s striking partnerships with companies, along with government agencies such as NASA and the U.S. army, with the hope that pilot programs will begin in 2020.

Talk of flying cars — which are many years away from moving around actual customers, if ever — offered a diversion from Uber’s embattled autonomous-car program. Testing has remained grounded since March, when one of its self-driving vehicles struck and killed a pedestrian in Tempe, Ariz.

Khosrowshahi said he expected Uber would resume testing in “the next few months,” once the National Transportation Safety Board completes its investigation. He said Uber is co-operating with the inquiry. Khosrowshahi then took a jab at Tesla Inc. CEO Elon Musk, who has taken a more combative approach with the agency. “We will not be tweeting ahead of their findings,” Khosrowshahi said.

Khosrowshahi also emphasized Uber’s commitment to electric bicycles following its acquisition of Jump Bikes last month. The business competes with several venture-backed startups offering similar services for renting bikes and scooters around cities using an app. “If the unit economics and the technology is there, our appetite to invest is infinite,” he said.

Uber preps test of 30-minute food delivery by drone added by Newsroom on May 16, 2018
View all posts by Newsroom →