By Newsroom on December 1, 2016Comments Off on The Wild West of Mobile Advertising: Bots Fake Viewability 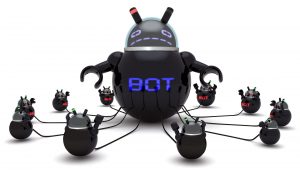 Initially simple scripts that click on display ads from server farms and compromised PCs, bots have evolved to become sophisticated viruses that are infecting mobile devices and are working their way into mobile apps. Working silently in the background, bots are viewing and clicking on ads, eating up advertisers’ budgets.

Mobile Ads as a Prime Target

But with the dynamic surge in mobile traffic there is also more room for fake views and clicks. Many publishers purchase additional traffic from resellers who buy from other resellers — often without really knowing what they are paying for, allowing bot traffic to seep in unknowingly.

Viewability as a Bot Detector

Bot traffic used to be automatically eliminated when mobile ad viewability was measured.

Viewability became an important measurement for ad effectiveness because advertisers weren’t interested in paying for ads that don’t load all the way, or appear so far down on the page they can’t be seen, or are miniscule beyond recognition.

In the early stage of mobile advertising, measuring viewability for mobile ads was challenging, due to the different screen sizes, device types and the fact that many sites were not optimized for mobile browsing. Bots were initially not able to provide viewability data.

When anti-fraud systems inspected mobile traffic and requested viewability measurements, bots were unable to respond, so their traffic was immediately marked as unseen and invalid. In other words, when ad traffic was checked for viewability, there was the extra bonus that bot traffic was automatically not included, and therefore not counted.

However, all that has changed. Some bots have already become more sophisticated and are now able to provide viewability data making fake traffic more difficult to detect.

At the same time, new standard measurements for viewability have been introduced. The Media Rating Council (MRC) last June stated that for a mobile impression to be viewable, a minimum of 50% of pixels must be in view for one consecutive second for display, and two consecutive seconds for video.

Based on analysis of mobile ad traffic for a large ad network, it has been discovered that bots are now impersonating viewability measurements that meet that standard so the fake traffic is no longer eliminated, and can be included with legitimate traffic.

One way for advertisers to ensure that ad traffic is valid is to detect and weed out bot-generated traffic before making a final call on what percentage of the traffic is viewable.

By combining fraud detection with viewability they can be more certain that ads are legitimate and fully rendered and within viewing range on screens of mobile devices. Together these two solutions provide double protection to protect advertising budgets and maximize the value of mobile advertising.

As long as fraudsters can prosper using bots to inflate mobile ad traffic measurements, ad fraud will continue to grow. There will be a constant need to detect fake traffic, especially now that bots can appear to be law abiding when they are outlaws cheating advertisers of their mobile advertising budgets.

The Wild West of Mobile Advertising: Bots Fake Viewability added by Newsroom on December 1, 2016
View all posts by Newsroom →