By Newsroom on March 15, 2018Comments Off on Tech giants like Google and Alibaba are working to save endangered species 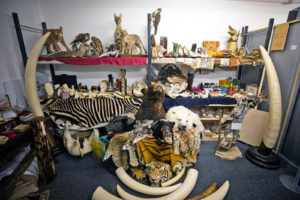 and other technology leaders are aiming to protect the world’s animals. Why? In a widely unregulated social-media world, many tech platforms have become a haven for the wildlife black market, a $20 billion industry.

The sale of illegal animal goods — from ivory to exotic pets — is the fourth-largest criminal global trade industry behind narcotics, counterfeiting and human trafficking, according to Traffic, a wildlife-trade-monitoring network. In the past decade, the sale of these goods and species has moved from illicit backroom dealings in stores to apps and online shopping ads.

Now, 21 tech giants from North America, Europe, Asia and Africa are taking a stand as the first businesses to join the Global Coalition to End Wildlife Trafficking Online, which has issued a pledge to reduce this illegal trade online by 80 percent by 2020.

The coalition is spearheaded by the World Wildlife Fund (WWF), Traffic and the International Fund for Animal Welfare. They’ll collaborate directly with these tech companies in drawing up action plans to take on trafficking threats and offering staff trainings to pinpoint illegal sales.

Giovanna Grein, program officer for wildlife crime for Traffic at WWF, said this will happen in two phases. First, companies will share what they have learned about addressing specific trade threats so they can learn from one another. Then, each company will develop a plan for its sites or apps. 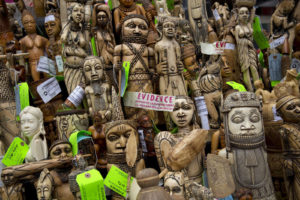 enforcement alone cannot police the open web globally due to the sheer scale of online trade and their limited resources,” said Crawford Allan, senior director for wildlife crime at Traffic at WWF. “We realized if the companies can remove ads before they are posted or can look out for organized criminals that they can report to law enforcement, this will really help tackle the problem rapidly.”

Allan said this coalition is the first of its kind, especially among companies that would traditionally be seen as competitors. Beyond Google and Alibaba, organizations that have joined the coalition are Baidu, Baixing, eBay, Etsy, Facebook, Huaxia Collection, Instagram, Kuaishou, Mall for Africa, Microsoft, Pinterest, Qyer, Ruby Lane, Shengshi Collection, Tencent, Wen Wan Tian Xia, Zhongyikupai, Zhuanzhuan and 58 Group.

When they asked these companies to be part of the coalition, WWF, Traffic and IFAW laid out the issues around wildlife trade and the role of these sites in facilitating illegal trade and explained how the companies can combat this activity by setting up closed-door workshops among the businesses. You might assume it would be a challenge to corral all these competitors, but Allan said they were all willing to confront the issue as an industry.

It might be impossible to make this criminal activity go extinct, but the coalition is a step in the right direction of saving some of the Earth’s most precious species.

Tech giants like Google and Alibaba are working to save endangered species added by Newsroom on March 15, 2018
View all posts by Newsroom →