By Newsroom on November 30, 2018Comments Off on Successful launch of SVPER’s prototype social networking app 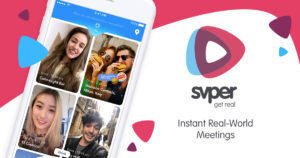 SVPER is the first mobile application that rewards you for meeting new people in the real world. It replaces user profiles, pictures and text messages with instant video invitations designed to encourage users to convert online connections into real-life relationships.

Users on the SVPER app create video invitations to which others can submit RSVP responses by recording a short video reply. The user can then choose which RSVP – or multiple RSVPs – they would like to accept and arrange a time and location to meet. Once they meet up, both users are rewarded with the Company’s in-app currency, SVP Tokens, to ultimately be redeemed at partner venues for future meetings.

Jean-Baptiste Fort, co-founder and CEO, said: “We are very excited with the successful launch of the prototype SVPER app and the positive feedback we have received. We believe our app represents the next generation of social media, leveraging blockchain technology to make it easier for people to meet up offline and socialise instantly and safely. The prototype demonstrates just how easy it is to sign up and record a video invitation, meaning that you can press on with finding likeminded people in your area looking for things to do and people to do them with.”

The Company has already received excellent feedback for its prototype from the SVPER community and will utilise this market intelligence to further improve the app.

In addition, SVPER will be continuing its roadshow within Europe and the Middle East to gain additional venture capital funding to ensure maximum success after the ICO period.

In order to incorporate the community feedback and allow sufficient time for due diligence checks and commitment of funds from interested parties, the Company has extended the ICO to 31 December 2018.