The World Surf League (WSL) and the Jeep brand have announced the release of their virtual reality (VR) experience, Jeep Sessions: A Surfing Journey in 360°.

Jeep Sessions: A Surfing Journey in 360° follows WSL Championship Tour surfers Jordy Smith and Malia Manuel as each embarks on a Jeep brand adventure to find the best waves. The project can be viewed in both a 360° video and an interactive VR experience. The VR application enables users to select their journey through “gaze-based interactions,” where the user’s eyes become the controller within the 360° visuals. 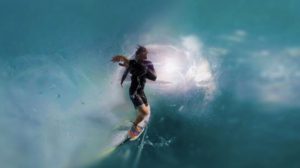 In this VR project launch, WSL teamed up with the Jeep brand and world-renowned production company, Rapid VR, to pioneer new frontiers in digital storytelling. Utilising Rapid VR’s unsurpassed knowledge of surf in the 360° video realm, directors Taylor Steele and Dave Klaiber wanted to push the limits with this film. They developed customised rigs to place the 360° video camera into locations never before seen. After the huge success of “Get Barrelled in Tahiti” with CJ Hobgood, Steele and Klaiber wanted to take this experience to the next level.

Says Steele: “Our project goal was to push the boundaries of VR technology to show what a surf trip feels like from the first-person perspective. I’m excited to share this. It’s pretty incredible knowing my mom can now experience riding a 20-foot wave.”

A Look Inside the Jeep Sessions: A Surfing Journey in 360°

Jeep brand Ambassadors Smith and Manuel were excited to share their journey to find amazing waves. The fan-favorite surfers have competed on the WSL Championship Tour since 2010 and 2012, respectively. Smith finished in the Top 5 in 2017, and Manuel is expected to have a breakout year in 2018 after a strong finish in 2017. 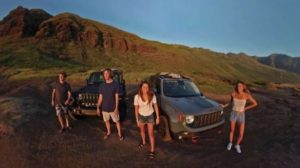 Smith: “This was a special project to be a part of, and I am excited for the world to experience the journey with us. It is incredible to see all the innovation that goes in behind-the-scenes to bring to life such a unique perspective of our surfing experience. When you’re surfing, many people just see the endgame, but it’s the whole adventure to find great waves with a friend. When you do, it’s the best feeling in the world.”

Fans have the option to choose to explore in Smith’s all-new 2018 Jeep Wrangler or Manuel’s Jeep Renegade. Filmed on the island of Oahu, both the Jeep Wrangler and Renegade demonstrated the Jeep brand’s legendary 4×4 capability and stylish design in an off-road adventure through forest terrain and beautiful beaches.

Says Manuel: “I love that everyone can go on whichever adventure they want in this VR experience. It’s a win-win for the viewer visually whether they go with me in the Jeep Renegade, or Jordy in the Jeep Wrangler, as we go off-roading to explore the beautiful scenery in Hawaii and find these amazing waves to share with the world.”

Within the app experience, viewers also have several points of choice presented by Sunny Garcia, Hawaiian surfing royalty who has scoured every inch of the island, which affect the narrative and result in different endings, including an option where all the featured surfers share waves together. 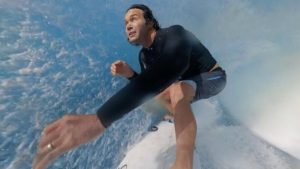 The multi-year partnership between the Jeep brand and the WSL, which renewed at the start of the 2017 season, allows the Jeep brand to tap into the unparalleled adventure, competitive drama and athleticism of surfing. The Jeep brand is the official and exclusive global automotive partner of the WSL Championship Tour and the naming rights partner to the WSL Jeep Leader Tour Rankings for the men’s and women’s Championship Tour.