By Newsroom on March 7, 2017Comments Off on NHS uses Snapchat to attract new recruits during National Apprenticeship Week 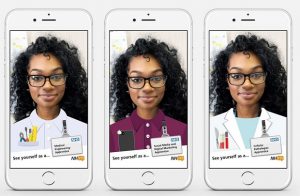 The NHS, the UK’s largest employer, is turning to Snapchat for a social media campaign aimed at attracting apprentices to the health service during the Government’s 10th National Apprenticeship Week.

The Snapchat campaign – which is a first for the Health Education England’s Health Careers service which is running the campaign – is part of a wider #NHyeS campaign to position the NHS in England as a major employer of apprentices and, with more than 150 different roles on offer, highlight the range of options available to young people.

HEE is targeting job centres with Snapchat Geofilters to highlight some of the more diverse roles available within the NHS including apprenticeships in gardening, painting and decorating, pathology and social media.

A new filter, with a visual cue to each of the roles available, will be used for each of the five days of National Apprenticeship Week (6-10 March) and each will be live at more than 20 job centres in ten cities across the country.

The campaign comes as research from HEE has revealed misconceptions about apprenticeships still prevail amongst school and college pupils:

Kirk Lower, HEE’s National Lead for Apprenticeships said: “Using our Snapchat Geofilters in and around job centres allows us to target a younger demographic, who we know are actively looking for work. As well as very specifically pinpointing our audience at a time when they are job-hunting, we are doing it in a creative way that will hopefully appeal to that younger demographic. One of the challenges we have is making people aware of the opportunities for apprenticeships in the NHS and the diverse range of more than 150 different roles on offer.”