By Newsroom on July 28, 2017Comments Off on New GoPro app pulls footage from the camera and automatically creates awesome videos

“QuikStories is our biggest leap forward since the invention of the GoPro itself,” says GoPro founder and CEO, Nicholas Woodman. “QuikStories is the simple storytelling solution our customers have been dreaming about for years.  It’s an absolute game changer.” 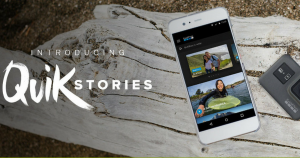 Making a QuikStory is as simple as pairing a HERO5 GoPro camera to your phone and launching the GoPro app. Then kick back as the app automatically copies your most recent GoPro footage to your phone and creates an exciting video for you.

Users also have the option of customising their videos by adding text, slow motion and speed effects, as well as by changing filters and music and adjusting the total video length. They can also add any footage on their phones to a QuikStory video.

The feature is now available for HERO5 Black and HERO5 Session users. To get started, download the new GoPro app from the Apple App Store or Google Play.

New GoPro app pulls footage from the camera and automatically creates awesome videos added by Newsroom on July 28, 2017
View all posts by Newsroom →