By Newsroom on May 17, 2016Comments Off on NASA uses Snapchat to showcase life aboard the International Space Station 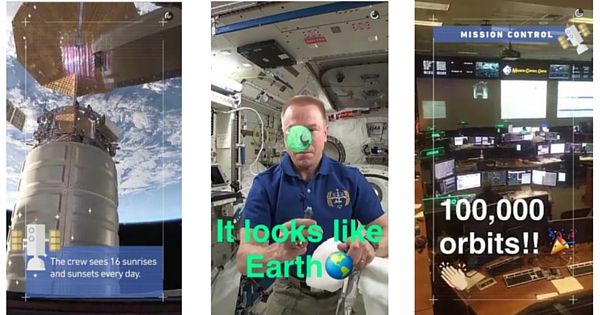 NASA has teamed up with Snapchat to give would-be astronauts a glimpse into life in microgravity.

On May 16, to mark the International Space Station’s (ISS) 100,000th orbit around earth, the US space agency unveiled a series of videos on the platform fronted by commander Tim Kopra.

Presented in real-time via Snapchat’s Live Stories service, ‘A Day in Space’ showcased the day-to-day activities of the crew, the pitfalls of eating tortillas in a weightlessness environment and what it looks like to float above the globe.

The story is still available to view via Nasa’s Snapchat feed, and continues the growing trend of astronauts using social media keep to keep planet earth updated on their progress.

British space major Tim Peake has been particularly active on Twitter since he arrived on the ISS in December. Most recently he was filmed running the London marathon from space and presented a Brit award to Adele via a live link in February.

NASA uses Snapchat to showcase life aboard the International Space Station added by Newsroom on May 17, 2016
View all posts by Newsroom →