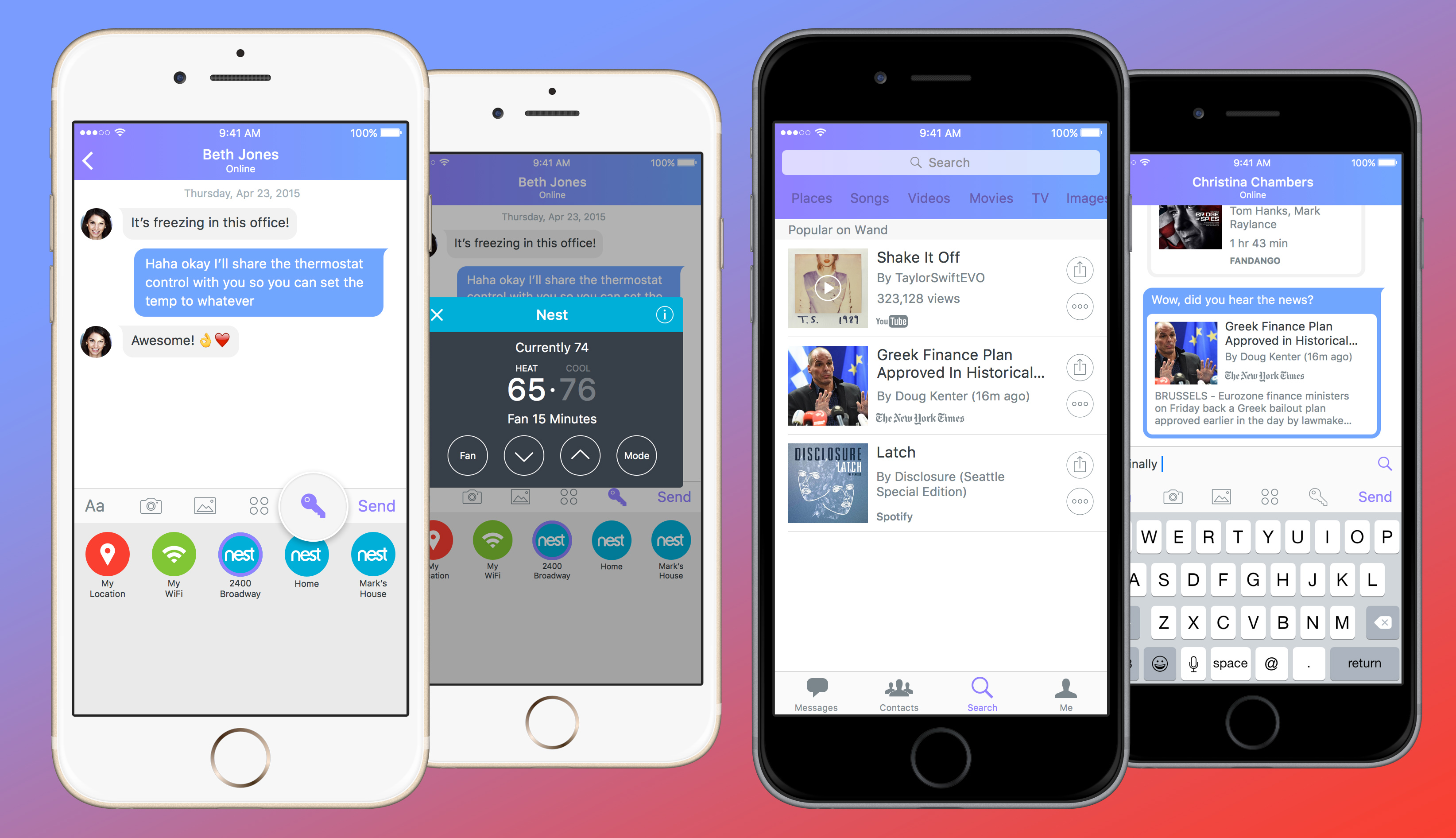 Microsoft made headlines by plunking down $26 billion for LinkedIn. Now it’s announcing its second acquisition of the week: For an undisclosed sum, the company has bought Wand Labs, a Silicon Valley-based startup that declares its mission is “to tear down app walls, integrate your services in chat, and make them work together so you can do more with less taps.”

Founded in 2013, Wand is tiny—it has just seven employees—and, though no longer in stealth mode, is hardly a household name. The iOS and Android apps it built haven’t yet reached general availability, and now they never will, as their creators put them aside and contribute to the greater Microsoftian effort.

But for all the ways that this acquisition is different than the mammoth LinkedIn deal, both transactions are pieces of the same puzzle. Microsoft is assembling a future for itself that involves big data, bots, connective tissue between an array of apps and services, and other concepts and technologies far afield from its legacy as a provider of packaged software. And it thinks that both LinkedIn and Wand can help it get there.

Wand’s apps, which used a messaging interface to let you perform a variety of collaborative tasks—from sharing songs to giving a friend the ability to control your Nest thermostat—”were demonstrators more than anything else,” says founder/CEO Vishal Sharma. All along, his company planned to work with big players to incorporate the types of capabilities it was building into products and services with sizable existing customer bases. Now the team that built the apps will continue their work inside one of the largest tech companies of them all.

Everything Wand has been up to fits in nicely with Microsoft’s current interest in conversation, which is part of an industry-wide trend to build bots, agents, assistants, and other tools that you can control by typing or talking. As Steven Levy explained last year in an excellent Backchannel feature, Sharma has been working on the ideas behind Wand for years. Before starting the company, he spent years at Google, where he was moved to create a voice-powered assistant called Jacob after an accident left his uncle blind.

“One thing led to another, and that got subsumed into a larger effort called Google Now,” he explains.

Once he left Google and founded Wand, Sharma got going on the conversational approach to software interfaces that became major fodder for developer conferences such as Microsoft’s Build and Facebook‘s F8 in 2016. “We’ve been ahead of the curve,” he says. “We were talking about actionable messaging a year and a half, two years ago, and pushing the envelope.”

Now the people who made up Wand will aim to continue that envelope-pushing as part of the Microsoft-wide initiatives that executives such as CEO Satya Nadella, executive vice president Qi Lu, and chief experience officer Julie Larson Green, of the services and applications group, are championing. “There’s a lot of shared vision,” Sharma says. “It’s clearly become a different company since Satya took over.”

Rather than continue on as a self-contained operation, Wand’s staffers will be subsumed into Microsoft’s existing structure, working closely with those responsible for products such as Bing and Cortana. The acquisition moved so quickly, Sharma told me, that some of the details of who will be doing what are yet to be worked out—but he expects that most ex-Wanders will be part of the knowledge graph team, and that they’ll move into Microsoft offices.

What his startup has been doing to integrate disparate apps and services via a conversational layer represents only part of Microsoft’s far-flung vision, but it’s an important component. The entire industry is still figuring out how to create productive experiences via voice assistants such as Microsoft’s Cortana, messaging apps like Facebook Messenger, and screenless devices such as Amazon‘s Echo. “Once you’ve moved from the desktop environment to mobile environments to hands-free environments to eyes-free environments, it becomes very challenging for users to look stuff up, share stuff, etc.,” Sharma says.

For now, most of the conversation-powered productivity experiences that Microsoft envisions and bought Wand to bolster are not yet a reality. You can make the case that nobody else has come up with a true killer app, either. Sharma believes that’s because the whole concept is still in its infancy.

“The truth is, vast amounts of chatbots out there are not very good,” he says, comparing the current state of technology to the early days of the web, when the average site was downright rudimentary. Back then, he jokes, “if you wanted to be really fancy, you had blinking text.”

How long will it take until there are bots that feel like they’re essential tools rather than faddish experiments? “Within the next year, there are going to be some valuable experiences,” Sharma predicts. “But also a lot of learning and a lot of rapid evolution going on. Even those blind alleys will advance the frontier.”

Microsoft Boosts Its Chatbot Future By Acquiring Wand Labs added by Newsroom on June 17, 2016
View all posts by Newsroom →