Meet The Mining Screensaver, a project that helps change the world from a screensaver

By Newsroom on June 14, 2018Comments Off on Meet The Mining Screensaver, a project that helps change the world from a screensaver

Ever thought about contributing to humanitarian causes and helping people change the world from a simple screensaver? It sounds easy – and it really is!

Change.org, the world’s largest petition platform, and TracyLocke Brazil, part of Omnicom Group shopper marketing agencies, have created The Mining Screensaver, a screensaver that, once installed, uses computers to mine cryptocurrencies and turn them into donations for the Change.org Foundation, helping promote changes in areas such as health, education, human rights, economics and politics.

In practice, a download is sufficient and that leaving to a meeting and the idle time on the desktop or on the laptop automatically becomes donations. The mining process works as follows: The Mining Screensaver performs a pool mining operation, which means that whenever computers with the screensaver installed complete mining calculations, they receive micro fractions of cryptocurrency, which are automatically transferred to the Change.org Foundation account. The software is totally secure and the more computers are mining together, the greater is the processing power, increasing the donations.

The foundation then allocates the money raised to fulfil its mission throughout the world, with a special focus on Latin America and Brazil. Today, more than 200 million use Change.org all around to world to change what they want, a number that grows every day.

The Mining Screensaver donations help stories like that of a family from Central Brazil that managed to make the National Sanitary Surveillance Agency change its position on a drug. Wiataiana de Freitas and Valdir Francisco collected 77,000 signatures in 2014 requesting the release of cannabidiol (substance found in cannabis sativa) to treat their child suffering from epilepsy at age 9. Via Change.org, the pressure on the agency and the then Minister of Health worked well and the substance was released a month later.

Petitions are also used in urgent humanitarian causes, such as the more than 1,600 created at Change.org to raise funds for the Mexican population after the September 2017 earthquake, housed under the hashtag #FuerzaMéxico and that mobilised more than 3 million and 600 thousand supporters. In all cases, the work of Change.org teams in each country is to support the people who use the site, to join signatures, to organise petitions and to act in support of the causes, in addition to producing content and working for each petition to be highlighted in the media. All this financed directly through individual donations. 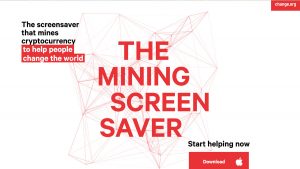 With The Mining Screensaver, the estimate is that 10,000 people with the screensaver installed and the computer on for 12 hours every day over a period of one month, can raise approximately $ 10,000.

The project also seeks partnerships with companies that can support the Change.org Foundation by installing the software on their office computers, helping the project grow even more.

A study by the University of California Irvine found that desktop computers averaged 61 percent of the time “idle”, which represents a huge potential for fundraising aimed at social causes through The Mining Screensaver.

“Our difference is telling stories and empowering people around the world via technology – and the project meets that mission. Apart from that the screensaver solves the question of the high energy consumption that is usually used when mining cryptocurrencies. What The Mining Screensaver does is transform an energy that would be wasted on social investment. We can say that we will receive environmentally sustainable donations, and this is fantastic and innovative,” says Lucas Pretti, general director of Change.org in Brazil.

“We identified that there was a seasonality in the wave of donations and collections in the third sector. Our great challenge was therefore to create a simple and efficient way of in just one click, making anyone with a computer into a recurring donor,” says Pipo Calazans, CEO of TracyLocke Brazil.

“It is also worth mentioning that this is an open source project, meaning that any NGO interested in creating a recurring collection platform can use our screensaver”, says Fábio Moran, Creative Director of TracyLocke Brazil.

Meet The Mining Screensaver, a project that helps change the world from a screensaver added by Newsroom on June 14, 2018
View all posts by Newsroom →