By Newsroom on June 27, 2018Comments Off on Länsförsäkringar turn hate into love with new autocorrecting app The Nasty Filter

After the World Cup game between Sweden and Germany on June 23, Swedish soccer player Jimmy Durmaz was exposed to a massive wave of race hate on social media.

To make a clear statement against this abusive behaviour, the Swedish insurance agency Länsförsäkringar decided to launch a Nasty Filter app – a service that turns hateful words into messages of love using autocorrect. By scanning the abusive comments Durmaz got in his Instagram feed, the agency noted down the kind of hate that he was being subjected to – and added them to the Nasty Filter. 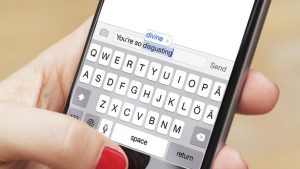 This way, when the shameful, hateful terms that were actually being used – things like “terrorist pig,” “bearded animal,” “traitor,” “scum,” and “inbred” – were detected by the app, the autocorrect filtered them out and replaced them.

To bring some attention to the app – and the service it provides, which is obviously needed – a video was created that shows how a hateful comment is transformed into a message of pure love.

Länsförsäkringar is working preventatively to improve young people’s mental health online. Besides FulFiltret, they launched the #ImPerfect initiative earlier in 2018, aiming to reduce pressure around perfection in social media.

The app, which was devised by advertising agency Stendahls, is now available to download from the App Store and Google Play.

Länsförsäkringar turn hate into love with new autocorrecting app The Nasty Filter added by Newsroom on June 27, 2018
View all posts by Newsroom →