By Newsroom on February 6, 2018Comments Off on Intel unveils smart glasses that look like regular frames

Intel’s own take on smart glasses has been unveiled. It’s called Vaunt, and where Google Glass failed to blend into the designer crowd of eyewear, Intel’s attempt mostly nails that endeavor.

Vaunt looks just like regular frames and a big part of that accomplishment stems from the fact that Intel’s glasses aren’t like Google’s discontinued project, Snap Spectacles, or Epson’s Moverio glasses. There’s no camera to peer into the world with, no buttons to scroll through menus, or much of anything else, really. 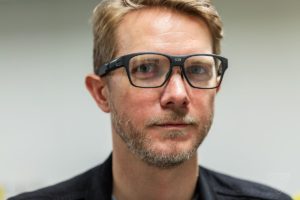 has discovered a way to pack in only the necessary tech, like Vaunt’s battery, essential sensors, and other components, into the sidearms of the glasses without ballooning their size beyond what you’d normally expect in a set of glasses.

Beyond its smart design, Intel’s stands alone in this small group of experiments as the only model that can project images via lasers onto your retina, and with that, it lets you remain in the moment.

Intel’s Vaunt glasses were intentionally made as a low-feature product, working to deliver important notifications and updates to the heads-up display as you might expect, but done in such a manner that it doesn’t distract you, or clue others into you being more absorbed in your tech than the conversation at hand. 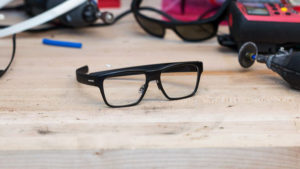 passersby, it’s almost impossible to tell Intel’s Vaunt from any other set of glasses, according to The Verge’s first-look at the tech. The low-power class one laser built into the spectacles, which Intel says is so low-power that it doesn’t require certification, is tech wizardry at work. A special layer in the lens reflects the lasers into you eye, splashing the image onto your retina. It’s supposedly hard to notice from the outside, aside from being able to see a brief red flash from a certain angle. 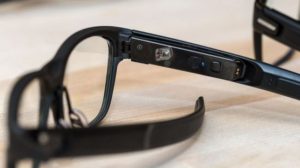 terms of what the user will actually witness with Vaunt equipped, Dieter Bohn details his experience with the prototype, saying that Vaunt “projects a rectangle of red text and icons down in the lower right of your visual field. But when I wasn’t glancing down in that direction, the display wasn’t there. My first thought was that the frames were misaligned.

“Turns out: that’s a feature, not a bug. The Vaunt display is meant to be nonintrusive. It’s there when you want it, and completely gone when you don’t.” 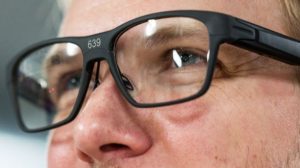 provides the user with info much like a wearable does, except without the hassle of trying to take action on that information. Intel shared that while it envisions adding in a microphone to chat with virtual assistants, like Alexa and Google Assistant, the main focus of the glasses is to make interaction easy and best of all, not obvious enough to give away that you’re wearing smart glasses. Regarding Vaunt’s ease of use, Itai Vonshak, the head of products at Intel’s New Devices Group (NDG), states that “if it’s weird, if you look geeky, if you’re tapping and fiddling — then we’ve lost.”

There’s currently no release date set for Vaunt, but as it will be available for developers shortly, we’re likely to hear more about it soon.

Intel unveils smart glasses that look like regular frames added by Newsroom on February 6, 2018
View all posts by Newsroom →