By Newsroom on December 19, 2017Comments Off on Honda gives ‘ultimate get well card’ AR experience to young patients

‘Happy Honda Days’ are back and Honda is using augmented reality to deliver the “Ultimate Get Well Card”, a magical card filled with messages from well-wishers around the country and personalised for paediatric patients at the Children’s Hospital of Orange County (CHOC). 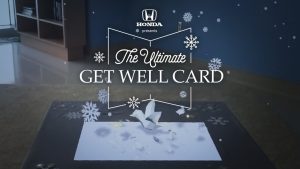 Honda transformed an actual CHOC hospital room into an augmented reality winter wonderland in order to bring to life crowdsourced messages from well-wishers to be viewed by young patients through an iPad, held in a custom designed holder, triggering a wintery augmented reality experience.

“Sending warm wishes to others is one of the best traditions of the holiday season and through a little Honda innovation we’re using augmented reality to send messages that will brighten the lives of young patients at Children’s Hospital of Orange County,” said Susie Rossick, Assistant Vice President, Honda Marketing. 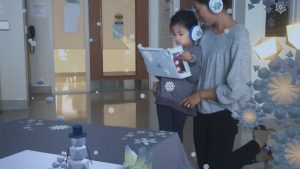 To enable the children at CHOC to hear from well-wishers, Honda pushed out a short holiday-themed video in September inviting fans to leave get well wishes via Facebook and Instagram. Honda received hundreds of messages with select messages ultimately loaded on the virtual card, along with personalised videos from hospital staff.

In the “Ultimate Get Well Card”, children see their name personalised on the front of the card, which then magically opens to reveal the contents on paper that come to life and fill the room. As the child interacts with the card, the images float forward and flip over to reveal heartwarming content. Utilising both text and embedded video, the intent is to surround the child with genuine and sincere holiday messages. 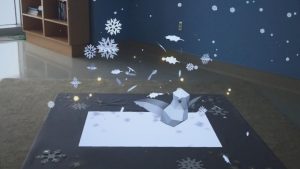 An online film was created in partnership with RPA from the experience, which is available on Honda’s social channels. For every Facebook “Like” or “Love” of the video, Honda will donate $1 each up to a total of $100,000, to both CHOC and the Paediatric Brain Tumor Foundation (PBTF), Honda’s charity for more than 26 years. The Ultimate Get Well Card is a chance to bring a one-of-a-kind augmented reality holiday experience to children in need.

Honda is a longtime supporter of both CHOC, which provides high quality care to children, and the PBTF, which is the world’s largest nonprofit solely dedicated to children and teens with brain tumors.