By Newsroom on January 5, 2018Comments Off on Didi Chuxing buys control of 99, Brazil’s leading ride-hail app 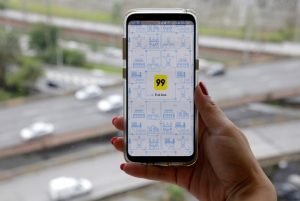 Didi Chuxing, the ride-sharing giant of China and likely the most valuable startup in the world, just bought a controlling stake in 99, a leading ride-sharing app in Brazil.

According to Reuters (citing a repot in Valor Economico, a leading financial newspaper in Brazil), the deal values 99 at $1 billion. Didi already had a minority stake in the startup, having invested $100 million over a year ago.

“Globalisation is a top strategic priority for Didi,” Cheng Wei, founder and CEO of Didi, said in a statement. “With enhanced investments in AI capabilities and smart transportation solutions, we will continue to advance the transformation of global transportation and automotive industries through diversified international operations and partnerships.”

The news follows the announcement that Didi plans to expand into Mexico in 2018, intensifying its global rivalry with Uber. Softbank recently succeeded in its bid to acquire a large chunk of Uber at the discounted valuation of $48 billion, which most likely positions Didi (estimated value $56 billion) as the world’s most valuable startup.

Didi has had a very interesting couple years, to say the least. The company first crossed many peoples’ radars when Apple announced it had invested an eye-popping $1 billion in the ride-hail service. At the time, Didi was locked in an intense competition with Uber for China’s rapidly growing ride-hail market.

Eventually, the battle grew too costly for Uber, which was reportedly spending $1 billion a year in China. In August 2016, then-Uber CEO Travis Kalanick announced his plan to sell his Chinese business to Uber for a 17.7 percent stake in Didi and a seat on the company’s board. In exchange, Didi invested $1 billion in Uber.

Didi has also invested in many of Uber’s rivals, including Lyft, India’s Ola, Singapore-headquartered Grab, Estonia’s Taxify, and Careem in the Middle East. Now, with its purchasing of a controlling stake in 99, it has moved into a new, more intensive game: mergers and acquisitions.