By Newsroom on November 7, 2017Comments Off on Cryptocurrency Pioneer POW Integrates with Twitter 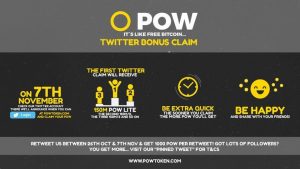 POW, the free digital currency, has taken another significant step towards becoming the first global currency by integrating with a second social media platform; Twitter.

Launched on October 3, POW was given away for free to anyone with a Facebook account. So far, 47,000 people have claimed POW via Facebook and are sharing it amongst their friends around 1,000 times a day. The team expect take-up and sharing of POW to continue to increase as it integrates with Twitter and other platforms.

Currently, POW holders are able to exchange the currency with their Facebook friends. Twitter users will be able to share it amongst any of their followers who have also claimed POW, facilitating the viral exchange of the currency on a much broader scale. 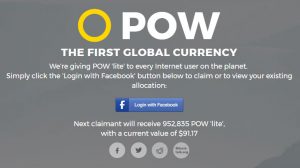 Overall, over 110 billion POW has been distributed so far, with a total value of $7m. There is plenty of POW still available to anyone wanting to claim theirs. In fact the more people claim, the more it’s worth.

Simon Wajcenberg, co-founder of POW, said: “While Facebook has a phenomenally large user base, it’s relatively closed off in terms of users’ networks. We see Twitter as a more social platform with more shareable content and lots of opportunities to engage with people you don’t know directly. POW has had a remarkable first month and we want to keep growing our user base. Whether they want to share and spend it on a daily basis or check on it in five years for a pleasant surprise, POW is a risk-free investment for anyone. Our goal is for everyone who owns POW to be able to spend it in stores, exchange it for other currencies or hold it as a potential nest egg.”

Cryptocurrency Pioneer POW Integrates with Twitter added by Newsroom on November 7, 2017
View all posts by Newsroom →