American shoe company Converse, have teamed with creative agency AKQA, to launch their new campaign. ‘Forever Chuck. For Every You’ aims to position Chucks for a new generation of teenagers, showing them that iconic Chuck Taylors are the perfect pair for whoever and whatever they want to be.

“Whoever you are, however you identify, there’s a Chuck for every you. Unlike previous generations, today’s youth aren’t looking for perfect. They’re not interested in sticking to one identity or style, they have confidence in uncertainty and change,” said AKQA in their release.

AKQA worked on the campaign concept and ongoing production and execution, and partnered with Jen Brill Studios for visual look and feel. 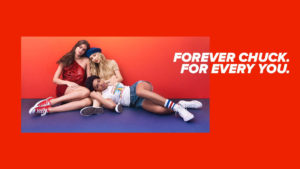 Converse’s ‘Forever Chuck. For Every You’ Campaign Launches with AKQA added by Newsroom on November 13, 2017
View all posts by Newsroom →