By Newsroom on March 13, 2018Comments Off on Apple Maps now includes bike-sharing locations in 179 cities 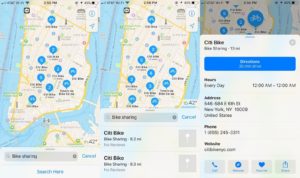 Apple began working bike-sharing info into Maps last April, but the company’s partnership with Ito World greatly expands the amount of available bike-sharing data. There are a few limitations though. Apple Maps can show you where bike-sharing docks are located but not how many bikes are available or how many docks are currently empty and it can’t give you information on dockless bike-sharing services.