By Newsroom on September 5, 2017Comments Off on Tinder hits top grossing app in the App Store on heels of Tinder Gold launch 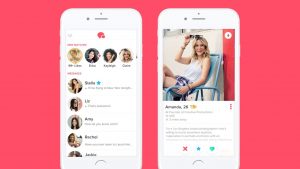 Tinder has hit number 1 in the App Store’s top grossing category for the very first time.

Claiming top spot in the App Store likely has to do with the global launch of Tinder Gold, which lets users see who has liked them without swiping at all, among other premium features.

Tinder’s initial foray into monetization came in 2015 with the launch of Tinder Plus, which lets users “Rewind” on accidental left swipes and includes the “Passport” feature, letting users search outside of their current geographical radius.

The company has since added new revenue models, such as advertising within the feed. Plus also includes a limited amount of a la carte paid features, such as Super Like and Tinder Boost. 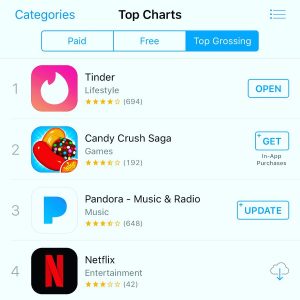 Super Like lets you notify someone you really like that you’re into them before they even swipe on you, marking your profile with a big blue star. Tinder Boost, on the other hand, lets you skip the line and jump to the front of other users’ feeds as they browse the dating service.

While Tinder Gold was in testing in a handful of markets for the past month, the company officially rolled out Tinder Gold worldwide on August 29. The next day, Tinder topped the Top Grossing category of the App Store.

App Annie says that dating apps made up one-third of the top 15 apps by iOS revenue on August 31, along with video and music streaming apps. The analytics service also said that Tinder has been in the top 15 iOS apps by daily revenue throughout all of 2017, and hung in the top 10 for July and August.

Tinder hits top grossing app in the App Store on heels of Tinder Gold launch added by Newsroom on September 5, 2017
View all posts by Newsroom →