By Newsroom on January 26, 2018Comments Off on Sweden’s first driverless buses hit the streets 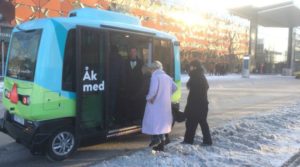 company Ericsson has partnered with local Swedish public transportation and technology providers to conduct a six-month trial of two electric self-driving shuttle buses on public Stockholm roads. The goal is to test how the autonomous vehicles perform under real-word conditions for an extended period alongside cars, cyclists and pedestrians.

The fully-electric buses can carry 11 passengers (free of charge) at speeds of up to 24 km/h (15 mph) in non-ideal weather conditions. Their autonomous driving capabilities are supplied by Ericsson’s open API Connected Urban Transport (CUT) platform, which allows the buses to communicate with sensor-enabled bus stops, traffic lights and road-signs. 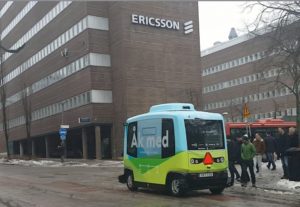 With successful deployment of similar systems in countries like the Netherlands, the off-the-shelf platform also shares traffic data with transport agencies and service providers locally, or within multiple municipalities, to help ease congestion.

The testing of the shuttle buses is one stage of the Drive Sweden innovation project, which was launched by the Swedish government in 2015 to address issues of road safety, infrastructure and legislation surrounding autonomous vehicles. The second half of the six-month trial will also include tests of the buses’ connectivity to a 5G network.