By Newsroom on May 4, 2016Comments Off on Saatchi & Saatchi create ‘Sea Hero Quest’, the World’s first mobile game where anyone can help scientists fight dementia

Deutsche Telekom unveils ‘Sea Hero Quest’. Developed in partnership with a team of scientific researchers from University College London, The University of East Anglia and gaming experts Glitchers, ‘Sea Hero Quest’ is a new multi-platform mobile game designed specifically to help advance the understanding of spatial navigation, and therefore understand one of the first symptoms of dementia. Bringing scientists one-step closer to developing new diagnostic tests for dementia, it is one of the biggest studies to date into the condition. 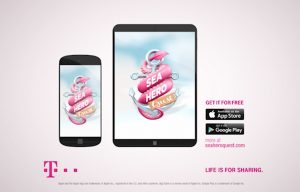 For many people living with dementia, one of the first effects they experience is a loss of spatial awareness, as they lose the ability to navigate their way through even well-known places and environments. Creating a global benchmark for how we navigate is widely acknowledged as one of the key steps towards developing new diagnostic tests for the diseases that cause dementia. All data collected from the game will be made freely available to scientists worldwide and will also be used by UCL: one of the World’s leading dementia research faculties, to develop new diagnostic tests for dementia.

The game ‘Sea Hero Quest’ is a multi-level adventure game in which the player takes on the role of a sea explorer’s son traversing the seas, looking for and collecting the lost pieces of their father’s ocean journal. On their journey, players need to find and photograph weird and wonderful sea creatures. ‘Sea Hero Quest’ is available worldwide, free of charge from the App Store and Google Play.

An animated film, directed by Bibo Bergeron will support the game by revealing its backstory of an ageing Sea Explorer who slowly loses his memories of past sea voyages to dementia. Demonstrated in the film through pages of his beloved journal being lost, the viewer understands the disintegration of the old man’s memory. 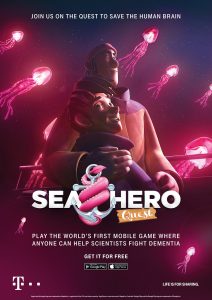 Over 47.5 million people worldwide currently live with dementia (more than the population of Spain), with this number estimated to increase to 135 million by 2050. People living with dementia gradually lose their ability to share precious moments, and the formation of new memories is severely disrupted, often leaving them isolated, disorientated and disconnected.

For many people living with dementia, one of the first effects experienced is getting lost; also known as a loss of spatial awareness, as the person loses the ability to navigate their way through even well-known places and environments.

Led by Deutsche Telekom, and created by Saatchi & Saatchi, London, the concept of ‘Sea Hero Quest’ was motivated by the desire to empower people to game for good and made a reality by partnering with world-renowned experts in their respective fields. 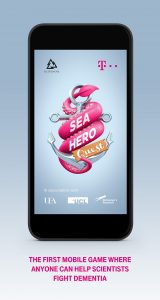 “Deutsche Telekom’s ‘Life is for sharing’ ethos has gone beyond participating in a particular memorable moment and invites people to actively contribute to dementia research on a global and unprecedented scale. This project demonstrates how collaboration can go beyond brands and institutions to making consumers partners in the future. We are proving that great things do happen when people start to share,” said Jason Romeyko, Global Chief Creative Officer, Saatchi & Saatchi Switzerland and Deutsche Telekom Global Chief Creative Officer.

The initial creative concept was motivated by the power of Deutsche Telekom’s network and its 200 million users. With 3 billion hours spent playing online and mobile games weekly by the global population, the aim was to manifest that power but to go beyond to reach the widest audience possible and to recognise the part that technology plays in everyday lives.

Hans-Christian Schwingen, Chief Brand Officer at Deutsche Telekom said, “Deutsche Telekom believe in the power of sharing. We knew that there must be a way of empowering everyone to share their time to help to move us one step closer to a breakthrough in the field of dementia. At the same time, we realised that if we wanted achieve real scale and truly make a difference, we needed to make it fun for everyone involved. We needed to create something that would get people gaming for good.” 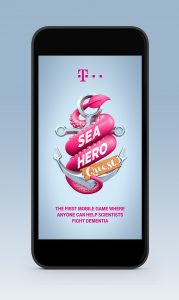 Key partners on the Deutsche Telekom ‘Sea Hero Quest’ project include; charity Alzheimer’s Research UK, University College London, The University of East Anglia and game developers Glitchers. Every aspect of the game has been designed jointly by game developers and scientists to provide insights about the way that people navigate every day. As players make their way through mazes of islands and icebergs, from the shores of the Kano Reef to the High Seas, every second of gameplay will be translated into scientific data and stored anonymously and securely within a T-Systems data centre in Germany. The result of the innovative partnership will be the creation of the world’s largest crowd sourced database benchmarking human spatial cognition, a key aspect of brain function affected by dementia.

Hilary Evans, Chief Executive, at Alzheimer’s Research UK, said, “We have never seen anything undertaken in dementia research at this scale before. The data set that Deutsche Telekom’s Sea Hero Quest generates is truly unprecedented, until now these kind of investigations took years to coordinate and at best gave us a snap shot of how a very small sample of volunteers behaved. The largest spatial navigation study to date comprised less than 600 volunteers. Providing the research community with access to an open source data set of this nature, at this scale, in such a short period of time is exactly the kind of innovation required to unlock the next breakthrough in dementia research.”

The unique collaboration between creativity, science, gaming and telecommunications is in the spirit of Deutsche Telekom’s reputation for identifying innovative products and services at an early stage, and utilising human interaction for the greater good of humanity.

Sea Hero Quest is available globally for iOS and Android devices and can be downloaded now for free from the App Store and Google Play.

Saatchi & Saatchi create ‘Sea Hero Quest’, the World’s first mobile game where anyone can help scientists fight dementia added by Newsroom on May 4, 2016
View all posts by Newsroom →