By Newsroom on July 24, 2018Comments Off on KFC’s Bizarre Facebook Live Stream Attracts Around a Million Cat Lovers

KFC partnered with Super Deluxe to run a four-hour live stream of cats exploring a model of the brand’s mascot and founder Colonel Sanders.

The agency broadcast live footage of the felines exploring a six-foot effigy of the Colonel on Facebook Live. It’s believed around 1m viewers tuned into the spectacle, with 700,000 watching live and another 400,000 watching the recorded version. 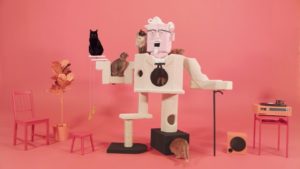 Every few minutes, viewers were given the chance to vote on what happened next: activate the Colonel’s laser eyes, toss in a yarn ball, launch treats or turn on a cat-themed TV or radio station. Several times an hour, cat facts would flash on the screen and viewers could comment with suggestions for what to name the cats.

The description under a video shared by KFC on its YouTube, in which it cut together the highlights of the event, told a white lie: ‘This is NOT a shameless attempt to sell fried chicken by wooing the internet with cute kittens.’

KFC also underlaid the activity with some social good, urging viewers to adopt a cat from the Heaven on Earth Society of Animals shelter, based in LA.