By Newsroom on July 18, 2016Comments Off on Facebook Integrates Instant Articles With Messenger 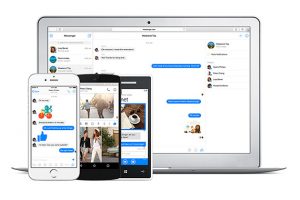 Facebook has merged two of its most treasured efforts: Instant Articles and Messenger.

Soon, Messenger users will begin to see a lightning bolt on the top right corner of select links shared in the popular app. These indicate that the link is an Instant Article.

“Currently, links shared via Messenger load in a mobile browser, which can be a slow experience,” Josh Roberts, product manager at Facebook, admits in a new blog post.

With the change, however, “people can have the same fast, interactive experience reading Instant Articles in Messenger that they have in the Facebook app,” according to Roberts.

For publishers participating in Facebook’s Instant Articles, no additional effort is needed. Soon, the social giant plans to render the Instant Articles version of their articles whenever its URL is shared in Messenger.

For Facebook, the change is part of a bold effort to establish Messenger as a communication hub of Facebook-like proportions. Already, Messenger boasts more than 900 million monthly active users. 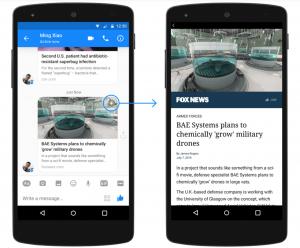 What Facebook is doing with Messenger is a big deal, experts at OMMA Boston recently agreed. Marketers should be most excited about the direct lines of communication it is creating between themselves and consumers, according to Josh Engroff, chief digital media officer at The Media Kitchen, and managing director of KBS+ Ventures.

The industry has “never really had direct communication between brands and consumers” to such an immense degree, Engroff told OMMA Boston
attendees. “Technology and media are at a tipping point.” Already, users can order a car via Uber and share a song via Spotify directly on the popular app.

Rarely does a week go by without Facebook adding some big new feature to Messenger. Among other additions, Messenger recently added group calling, Dropbox file sharing, and Video Chat Heads, which allows users to talk to friends from a smaller “chat head” instead of using their full phone screen.

Facebook Integrates Instant Articles With Messenger added by Newsroom on July 18, 2016
View all posts by Newsroom →