By Newsroom on November 14, 2016Comments Off on BBC Earth releases the ‘Story of Life’ app – the largest digital collection of Sir David Attenborough’s work 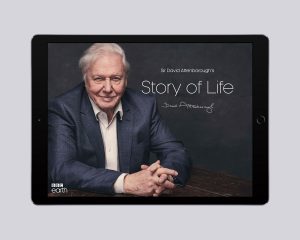 November sees the launch of an ambitious project to bring Sir David Attenborough’s breath-taking archive to new generations of fans.

The Story of Life is a free app from BBC Earth featuring the largest ever digital release of Sir David’s globally renowned work and will be available to download on Thursday 17th November from app stores for iOS and Android devices worldwide.

Launched to coincide with the 90th birthday year of one of Britain’s most iconic broadcasters, this app is Sir David’s gift to the world, featuring more than 1000 of the most memorable moments filmed during his pioneering career of natural history film-making.

“This is natural history for the digital age, allowing people to explore the story of life on earth and share their favourite natural history moments with the world” – Sir David Attenborough.

From his incredible interaction with mountain gorillas in Life on Earth, to his extraordinary meeting with a sloth in The Life of Mammals, The Story of Life invites people to explore films featuring hundreds of animals, locations and stories, from world firsts to some of the most dramatic and wondrous documentary scenes ever filmed.

The vast collection can be searched by ‘Habitat’, ‘Species’ and ‘Behaviour’, allowing users to quickly and intuitively find out more about their favourite creatures, watch scenes from loved series, or explore the incredible beauty of our planet. A series of exclusive films are also hidden throughout the app to encourage the audience to explore the full extent of Sir David’s remarkable archive.

Curated playlists by Sir David, BBC Filmmakers and others will highlight cherished moments, and more clips will continue to be added in the future. Users can also create their own collections of favourite moments to share with the world on social media, or keep within the app to revisit whenever they want.

A selection of epic moments from Sir David’s latest landmark series Planet Earth II are also in the app. Go behind the scenes of new filming techniques and watch in awe as camera traps provide a unique glimpse of snow leopards, witness the heart-pounding moment an iguana desperately tries to escape a band of racer snakes, get up close and personal with filming komodo dragons and journey with Sir David himself as he flies 10,000 feet into the sky in a hot air balloon.

Produced by BBC Earth with international award-winning ideas and innovation company AKQA, the app will be free to download globally. All clips featured in the app will also be made available here.