By Newsroom on November 21, 2017Comments Off on Amazon Echo comes in red now to help raise funds to fight AIDS 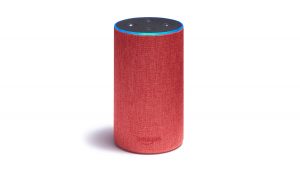 The new, second-generation Amazon Echo smart speaker comes in a variety of different coloured shells. Amazon is adding one more to the mix: a bright red shell that’ll help raise money for the fight against AIDS.

The newly coloured Echo is part of a collaboration between Amazon and (RED), and just one of a collection of new (RED)-inspired products currently available on Amazon.

A portion of the proceeds from each sale goes to the Global Fund to fight AIDS in Africa — with the red Echo, Amazon is pledging $10 for every speaker sold now through December 31.

Bank of America is also pledging 30 cents for every dollar spent on Amazon’s (RED) collection during the same timeframe, up to a maximum contribution of $1.5 million (this applies to US sales only).

The red Echo is up for preorder now at the same $99 price that you’d normally spend on an Echo. Units are expected to ship out a few weeks from now, in early December.

Amazon Echo comes in red now to help raise funds to fight AIDS added by Newsroom on November 21, 2017
View all posts by Newsroom →